Where Does Water Come from in a Well? 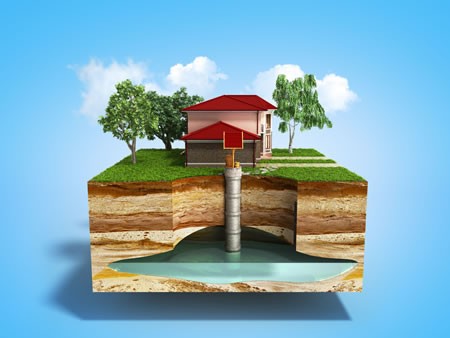 Water wells have become increasingly common in the United States as well as the other parts of the world. Water obtained from wells is free of any harsh chemicals and is thus, both healthier and tastier. It is, therefore, that an increasing number of homeowners are contemplating getting private water wells. A water well is simply a structure created in the ground to gain access to the groundwater present in underground aquifers. These days, water wells are constructed using a technique called Caissoning.

An essential question that all existing and potential homeowners often ask is: where does water come from in a well?

This article aims to provide a clear answer to this very question.

The water present in the environment in the form of oceans, rivers, and lakes circulates through the atmosphere and is then recycled into the ecosystem. This water reaches the surface of the earth due to various scientific phenomenons. When it comes to well water, many different sources add water to the earth’s surface from where pumps installed in water wells draw water.

Here are the three different ways in which water comes into a well.

Gravity is responsible for pulling water inside the surface of the earth. Due to the effect of gravity, the water present on the surface percolates into the underground surface. This water auto

matically makes its way into structures called aquifers. An aquifer is nothing but an underground layer of permeable rocks and unconsolidated materials, such as sand, silt, or gravel, that holds water within it. Standard water wells are designed in such a way that they are able to draw this groundwater through the use of a water pump.

Spring fed wells are way less common than the standard water wells that collect water from an aquifer. However, other than aquifers, sometimes, natural springs also add to the groundwater. These springs do not always break through the surface of the earth. Instead, sometimes, they become a source of underground water. Spring fed wells are commonly found in areas where underground natural springs supply groundwater. In these kinds of wells, the pump draws water being provided by a natural spring.

In an area where joints or faults have spoiled an aquifer, the water escapes the aquifer and rises naturally to form artesian springs. Artesian springs are commonly found in arid plains found next to mountainous regions. However, the impermeable rock layer present underneath the surface of the earth stops the water coming out from an artesian spring from reaching the earth’s surface. Thus, artesian wells are dug in areas where the porous rock layer receives water at a level higher than the groundwater level. In an artesian well, the water flows above naturally due to the effect of hydrostatic pressure.

The groundwater found in aquifers and other groundwater sources is naturally filtered through several layers of rock, silt, sand, and gravel. It is, thus, cleaner than the water supplied by municipal corporations. However, sometimes due to various reasons, even well water can become contaminated. Therefore, if you are a water well user, remember that it is crucial to get your water well checked periodically.

For More Information about “Where Does Water Come From in a Well?”

If you are in the Southeast Michigan area, give Ries Well Drilling a call to answer any questions you may have about our water well drilling pumps.  We can be reached at (586) 784-9516!